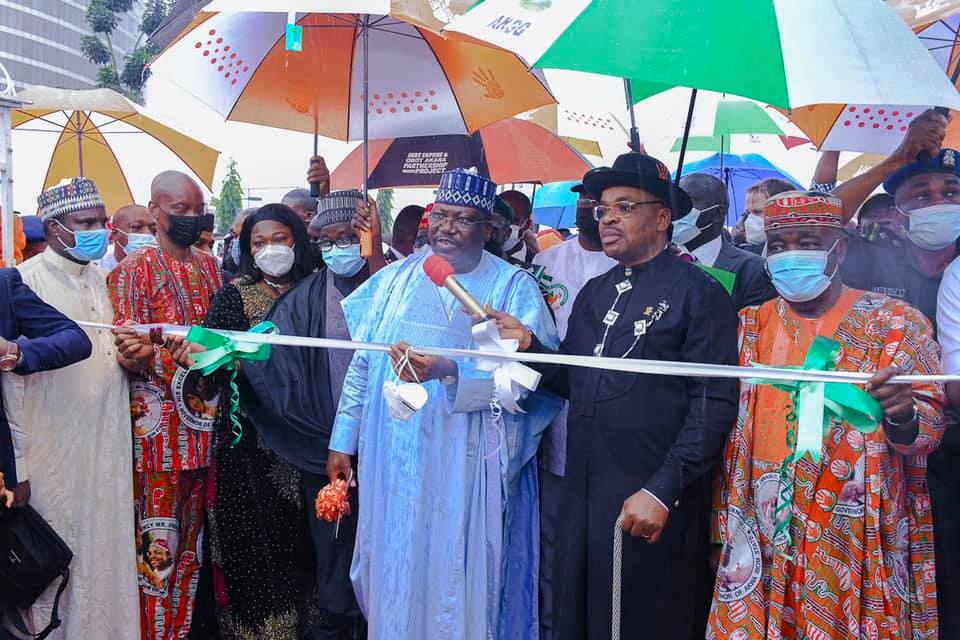 The road linking Akwa Ibom with Abia State, initiated by the immediate past administration was, as noted by the Senate President, inherited at 20per cent completion stage.

Speaking shortly before the commissioning in Ikot Ekpene, Akwa Ibom State on Tuesday, Sen. Lawan pledged to partner the Federal Ministry of Works and Housing to ensure refund of amount expended by the state government on construction of the road.

He commended Governor Udom Emmanuel for his unwavering belief in the unity, peace, development and progress of Nigeria, and for remaining a model in his approach to governance.

Responding to Governor Udom Emmanuel’s request for extension of Uyo -Ikot Ekpene road to Aba in Abia State, the Senate President promised to investigate why the project was abandoned and to partner the state in advocating for such extension.

His words “Governor Udom Emmanuel is justice, unity peace, progress and development. you are right in all the actions you take. when this road was left at 20per cent completion, you took it over, that explains how much you love your people. You are pan Nigeria, reasonable and purposeful.

“You have been very progressive. you are showing us how to develop our country. Though a federal road, you decided to complete it for your people. You have demonstrated to Nigerians that business of development must be on all tiers of government. What the Federal government needs is partnership, cooperation and development together.

“You more than deserve refund. I will join you in talking to the Minister of Works and Housing to facilitate refund. Let me use this opportunity to encourage other state Governors to imitate Akwa Ibom. Let me also commend other states who have done same. I will join the advocacy for extension of this road to Aba.

He said the Federal government has committed huge resources to infrastructural development.

While regretting the challenges confronting Nigeria, the Senate President called on all ties of government to hold hands to deal with such challenges. “We need honesty and sincerity in leadership. it doesn’t matter who you are, where you are from, your political or religious affiliations, we must unite to build Nigeria’” he added

Speaking earlier, Governor Udom Emmanuel of Akwa Ibom State declared that the road was constructed with state resources that would have been channelled to the development of other sectors of the state’s economy, and therefore appealed to the Federal government to ensure prompt refund to the state.

He made case for extension of the dualized road into Aba in Abia State to ensure ease of doing business for both states.

“This road may not be economically viable if the Federal government abandon the Calabar-Aba road that had long been awarded and left at the level of earthwork. We believe the Minister of works would reimburse us, to enable us link the entire state with these roads. I thank the senate president for creating time to come for the commissioning of this road which was critical to our completion agenda”. he said

Abiodun Swears In New Head Of Service In Ogun